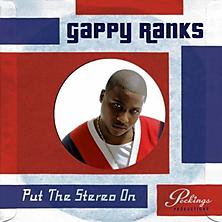 Info / Tracklisting: Gappy Ranks born and grown in Harlesden NW10 had made his studio debut with the Ruff Cutt band at age 11...

Lagerbestand: 2
SKU#: 100-005-00280
Produktinformationen "Gappy Ranks - Put the Stereo On (CD)"
"“Put The Stereo On” is launched on authorised versions from Studio One, Treasure Isle & Bunny Lee. Whether it’s “as good as old” gems like the title track “Put The Stereo On” (a record so in-demand the dancehall government have had to step in to authorize it’s immediate release), the straight to the heart romantic beat of “Happiest Day Of My Life” or the awesome word, sound & power of “Thy Shall Love” Gappy has it all under lock and key, he can sing like Tarrus and spit lyrics like Kartel and displays this stunning versatility both on stage and in the studio."