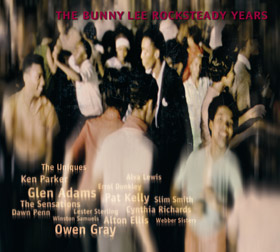 Info / Tracklisting: Many Reggae aficionados see the concentrated phase of Rock Steady between 1967 – 1969 as the Carribean’s most productive era of all time...

Lagerbestand: 1
SKU#: 100-005-00267
Produktinformationen "VA - The Bunny Lee Rocksteady Years (CD)"
Many Reggae aficionados see the concentrated phase of Rock Steady between 1967 – 1969 as the Carribean’s most productive era of all time.

Never before had such sweet melodies, inspiring rhythms and beautiful love lyrics come together. Numerous Soul hits by the likes of Curtis Mayfield, The Impressions, The Supremes all got the bass-driven, Jamaican style treatment. “The Bunny Lee Rock Steady Years” collects some of the most essential and rarest songs of that era – in a better sound quality than ever before! It showcases a wealth of soulful singers, ranging from top acts like Slim Smith (also lead-singer in the Techniques and Uniques) or Alton Ellis to the rather unknown Cnythia Richards or Webber Sisters.All songs were produced by Bunny Lee, one of the greatest Jamaican producers, who had one Rock Steady hit after another - finally earning him the nickname “Striker“. His star continued to shine way into the late Seventies. At the outset of the decade he had considerable success with Slim Smith und Cornel Campbell, he unearthed Johnny Clarke and revolutionised Roots Reggae with the Aggrovators and Sly & Robbie with their flying cymbal sound. He was one of the first to spot the extraordinary potential of King Tubby and his new creations in Dub and gave his records to Tubby for the final mix. The archive of Bunny Lee productions stretches to several thousands songs. Even his earliest hits have grown old gracefully and are as memorable as ever: who could forget “My Conversation“ or “Born To Love You“, “Long Time Me No See You Girl“ or “Let Me Go Girl“. His trademark has become the captain’s cap he always seems to be wearing (in a variety of colours).

This compilation is a valuable slice of history for Reggae and Soul fans alike, for lovers of great voices, for those who do not confuse “cool“ with cold and appreciate a good love song when it comes from the heart.