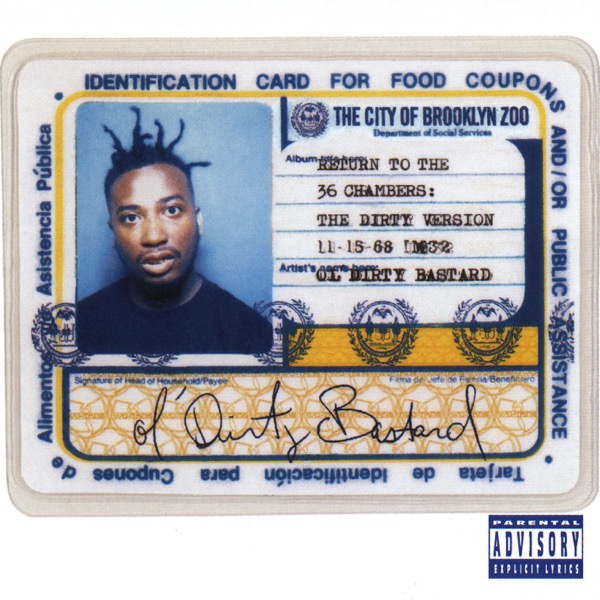 Back in stock! It's safe to say that hip-hop has never seen an album like Ol’ Dirty Bastard's 1995 solo debut Return to the 36 Chambers. The brief glimpses of ODB's unhinged genius provided by Wu-Tang Clan's landmark Enter the Wu-Tang album two years earlier were begging to be expanded on to a larger canvas, and, with RZA guiding production, the album promised to give Dirty the creative license to make one of the most bizarre, entertaining and original LPs in
hip-hop history. With his raspy, drunken flow and dark sense of humor, Dirty fearlessly attacks from all angles, throwing himself fearlessly into punchy rhyme attacks (“Damage,” with GZA), drugged-out party jams (the monster singles “Brooklyn Zoo” and “Shimmy Shimmy Ya”) and bizarre, grimly hilarious fantasies of sex and violence (“Don't U Know” and the R&B-tinged “Sweet Sugar Pie”). Backed by RZA's appropriately gritty, dissonant beats and
appearances from the Clan, Return became an instant hit, selling over 1 million copies and earning a Grammy Award nomination for Best Rap Album in 1996. The album stands as a high water mark in the Wu-Tang Clan's collective creative output and was selected as one of the Best 100 Rap Albums by The Source magazine in 1998. In honoring the legacy of one of hip-hop's most innovative releases, Get On Down is proud to present this incredible and
unique special edition of Ol’ Dirty Bastard's Return to the 36 Chambers as a double LP which contains the complete original album, remastered for optimal sound quality.