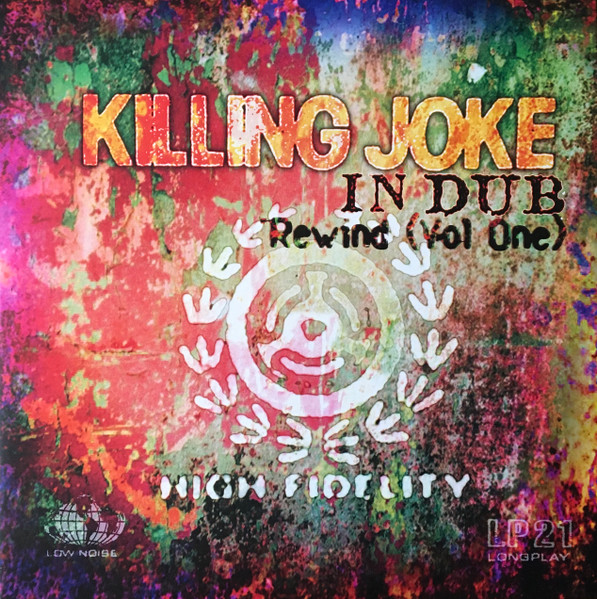 Always hinging on the peripheries of mainstream or commercial success, the post-punk collective known as Killing Joke has been marching to its own esoteric beat for over three decades. Exploring and thus influencing nearly every major form of modern music since 1979, Killing Joke has never been bereft of creative energy even amid circumstances that have crippled other bands. After the death of longtime Paul Raven, the original lineup of Jaz Coleman, Geordie Walker, Martin “Youth” Glover, and Paul Ferguson reunited for the first time in nearly a quarter of a century, releasing two acclaimed albums, a three-disc singles collection, and touring throughout Europe and the UK, all while each band member pursued his own respective projects. Now, the band offers up In Dub, a mammoth collection of dub remixes and rarities for the enjoyment of the fans. Eschewing the current trends of dubstep in favor of the more traditional forms spawned from reggae and with occasional forays into drum & bass and techno dub, the collection more than adequately lives up to its title with each of the three discs focusing on particular styles.

Things kick off with a bang on the straightforward first disc, labeled Apocalypse Dancehall; from the virulent synth and vocal manipulations of President’s Mustard in the Chalice Manifesto version of “Corporate Elect” to the acerbic MC rapping to be found in the Babylon version of “Money is Not Our God” or the clash of Arabic and Caribbean rhythmic modes on the Dynamics of Geometry dub of “Labyrinth,” the first disc alone offers up a hefty helping of smooth dub mixes that showcase Killing Joke’s rhythmic intricacies marvelously. The star of this disc is in this writer’s opinion the Voodoo Dub mix of “Eighties” as Raven’s steely bass thrums and throbs throughout the track, making for a danceable yet aggressive mix. The same could almost be said of the second disc, Rockers Retroactive, except for the more ambient direction initially hinted at with the A Floating Lead Always Reaches the Sea mix of “Requiem,” as the original’s stabbing synth bass is augmented by swirls of melodic pads that steadily give way to a groovy bass and beat, making for a spacey 10-and-a-half minute track. In similar fashion, the Cult of Youth Ambient Samsara Dub mix of “This World Hell” transforms the original’s boisterous rage into a bubbling foray into seething psychedelia, while the Urban Primitive version of “Tomorrow’s World” is appropriately titled as its chilled out cadence betrays its overarching tension. With the third disc of bonus tracks, Killing Joke steps away from the dub for a bit as the Banda remix of “In Cythera” places a special emphasis on the song’s understated acoustic guitar, complemented by twinkling synths and an infectious drum & bass beat, while the Nine Inch Nails remix of “Democracy” features a trailblazing helping of hard-hitting industrialized dance/metal. Of course, the Spiral Tribe remix of “Change” and the Follow the Dub version of “Follow the Leader” retain the dub styling, albeit in the more techno direction for a more upbeat and less subdued groove, and “Killer Dub” brings is all home for a delightful slow burn of an ending.

As if to remind listeners the importance of dub in the scheme of modern industrial and alternative music, as well as an indulgence on the band’s part (after all, even this vicious quartet needs a break from the standards it has set for itself), In Dub possesses a timeless atmosphere as it reinvents songs from across Killing Joke’s vast repertoire. Even the most caustic of the band’s songs purports aspects of inviting harmony and rhythm, losing none of the poignancy of the originals. While In Dub may not be an essential release for any but the most ardent of Killing Joke’s fans, it does stand as a pleasant offering to audiences celebrating three-and-a-half decades of being one of the most powerfully engaging acts in modern music.